Emily Webb has been social dancing since 1997, DJing since 2012. Through thousands of hours of social dancing and organizing events Emily has fine tuned her ear to what keeps people dancing all night long. The artistry of ordering songs, creating ebbs and flows, ups and downs, and dancer bliss is what Emily is after. Emily has DJ’ed for Fusion and Alt Tango dancers across the US and Canada. Including events such as Seattle Fusion Festival, Mission Fusion Extravaganza, Mile High Fusion, Motley Hue, Blues Recess events, Portland Alt Tango Festival, Connect Tango Festival, Burning Tango and more. 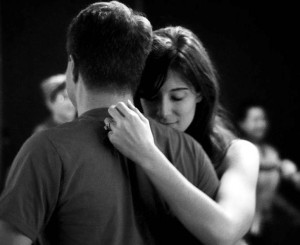 Kathleen discovered fusion dancing in 2012, coming into the dance with a background in blues, salsa, contra, and bhangra. Her first foundational fusion experience was at the Las Vegas Fusion Exchange, and she vowed to become a dj in part to recreate the excitement of that incredible weekend. For the past few years she’s honed her craft spinning at blues and fusion events in New York City, and has spun Internationally at DJX Fusion Weekend and DJX Summertime in Philadelphia, Motley Hue in NYC, and Montreal Blue Infusion. As a dj, Kathleen likes to create a mood that dancers can play with – whether playful or intense, sexy or soulful. She loves discovering new artists, and she can never resist a good cover.

Sapo is mostly appreciated for the eclectic side of her sets, likes to travel back and forth between rootsy organic sounds and electronic ones, minimalist and busy stuff, World-ish songs and North American ones. Head organizer of Montreal Infused, she started the fusion scene there in 2015. She was the music coordinator for Montreal Bagel N Blues from 2009 to 2017 and has Djed at Seattle Fusion Fest, DJX in Philly, Blues Muse, CTLX, Mystic Blues, Frankie’s 95th (blues late night), Melting Pot,Toronto Alchemy/DJX fusion weekend, Vancouver & Montreal blues & fusion dances.

Erin’s love of music began in the back yards of rural Ontario, surrounded by a family of rock and roll musicians. Her love of dance began much later, in the romanticized rhythms of salsa. Since then, her infatuation with different music and dance styles has enveloped and expanded beyond these disparate beginnings. As a DJ and a dancer, she loves emotive music that draws in a range of flavours and influences. Erin has been sharing music with the Toronto fusion scene since it’s conception over three years ago and DJs at dance events around Canada and the US.

Gaétan has been a DJ in his local scene for many years. His experience relates mainly to Blues, WCS, Brazilian Zouk and Fusion. He is constantly looking for new music through his daily life or his many dance trips. He is also a dance teacher, and has an academic background in music. He particularly likes the rich and contrasting music that is so common in the world of fusion.

Jody has been sharing her love of music and movement through DJing, since 2001. She dances vicariously through each and every person on the dancefloor and it shows. Jody has a passion for sharing artists’ stories told in song and uses them to shape the room’s mood, weaving a magical spell intended to keep you moving. Danceable songs are nice but Jody aspires to play music that compels you to dance, to forget your aching body, ignore your intended departure time and tempt you to put those shoes back on as you’re trying to leave. She makes her choices with dancer inclusion and types of dances in mind. Lindyhop, Blues, Balboa, Shag, WCS, Hustle, or a Fusion of styles, she’ll spin for it and you know it’s gonna be fun!

Justin began his dance journey with Contra at a Masonic lodge in Amherst, MA in 2011. He gleefully spun in circles for a few years before moving home to NYC, where he fell in love with both Blues and Fusion. Since then, Justin has hosted at Om Fusion (Seattle’s weekly Fusion dance),  DJ’d events on two different continents, and gained a deep appreciation for the community and creativity present in the Fusion scene. He’s excited to be ramping up for the second year of The Dance Thing (a camping/dancing fusion event) this June!

Raised in the Durham, NC blues and fusion scene, Bo has spent years traveling, dancing and collecting music around the world. Drawn to organic rhythms, percussive beats and candlelit voices, he weaves traditional sounds and contemporary genres together into an intimate dance experience. Currently based in Philadelphia, he has spun tunes for local dances and international events such as DJX, Recess, Montreal Infused, Motley Hue and Toronto Dance Alchemy.

Sameer aka Smooth-ee started Djing with his brother’s turntable in the 90’s. Distributing Dance and Hip Hop mixtapes for his friends and family, he would also DJ and MC at local parties and weddings. His focus would later shift to social dances in 2009 while taking salsa, bachata and kizomba lessons. Smooth-ee was then introduced to Brazilian zouk when he participated at the First International Zouk Flashmob in 2012. Since he gradually made his way as a headliner DJ and dancer in various festivals and Congress in the Americas and Asia. In 2018 he did over 130 hours of lambada training with Master Braz Dos Santos in Key West, Florida as dancing and DJing lambada has become Smooth-ee’s priority. Locally, Smooth-ee co-organized the Get Your Zouk On Festival in Montreal for the last 5 years, founded his own lambada dance organization « Ilha Lambada » with weekly lessons  and choreo training and hosted the first Lambada focused festival in Canada called Lambahia. mixcloud.com/Smooth-ee